President Donald Trump’s Twitter activity gets a lot of attention — some of it due not to his actual tweets, but to fake tweets attributed to him that are created and shared online.

He’s not alone; fake tweets are published in the names of many public figures. However, thanks to both Trump’s outsize personality and his current position, his tweeting does generate a context that is uniquely suited for false tweets to go viral: He is polarizing, so people tend to react to him with a high degree of emotion; his authentic tweets are often surprising and unorthodox; and he has been extremely active on Twitter (more than 37,000 tweets) since joining the platform in March 2009.

Thus, when a new, unconventional tweet attributed to Trump surfaces in the online chatter of the day, it is often assumed to be authentic. His critics are simultaneously outraged and unsurprised; their emotions and confirmation bias kick in; and they comment and share without stopping to confirm whether the tweet is legitimate.

Add to this the fact that convincing fake tweets are incredibly easy to produce — using any number of online generators that convert text into an authentic-looking image of a tweet — and you have a perfect storm for viral misinformation. 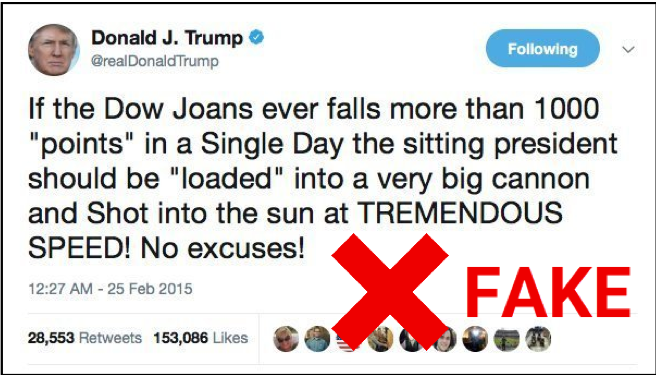 This fake Trump tweet — which includes a publication date of Feb. 25, 2015, more than three months before Trump declared his candidacy for the White House — actually circulated on Feb. 5, 2018, the day the Dow Jones index dropped 1,175 points.* It was created by Shaun Usher, a British author, blogger and curator of historic letters. He claims to have shared it as a joke — a parody of the many instances when Trump’s pre-presidential tweets have clashed with some aspect of his presidency. 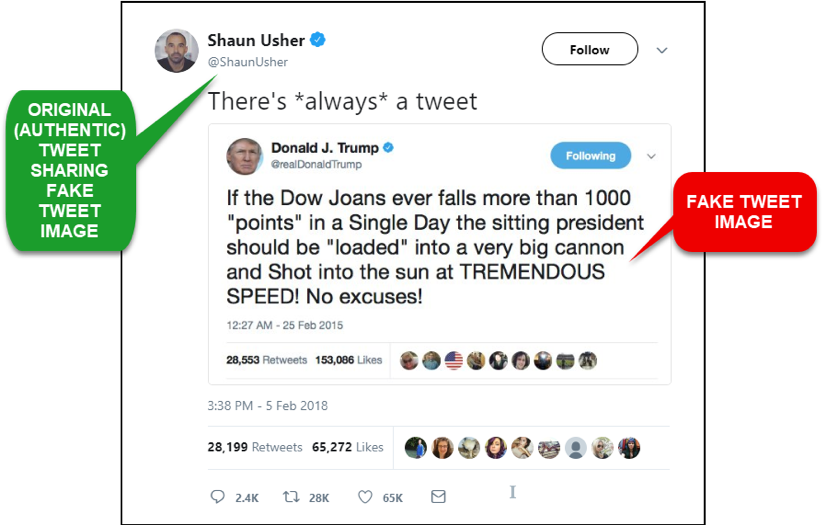 Shortly after sharing the fake “Dow Joans” tweet, Usher expressed surprise that people were taking it as genuine:

Key term: Poe’s Law is a maxim of internet culture that says an unlabeled satirical comment or parody post can be easily mistaken for a sincere, legitimate comment or for a post by a troll or extremist.

Insight: A significant number of viral rumors begin as jokes or as unlabeled satire.

Moments later, Usher went on to explain the speed with which the fake tweet went viral and the reason he decided not to delete his original tweet, to which the fake one was attached: to preserve “its place of birth,”  presumably so people who encounter it could find its origins if they looked.

Within a matter of hours, several fact-checkers had contacted Usher to confirm the origins of the tweet. Those debunks made the truth behind this rumor easy to find. So do archives of Trump’s tweets — including trumptwitterarchive.com, which lists all of his tweets from the time he joined the platform, and “All the President’s Tweets” from CNN.

Insight: A fake tweet is commonly accompanied by the (false) assertion that it was deleted in an attempt to (falsely) explain why it’s being shared as an image and why it doesn’t appear in the alleged author’s actual Twitter feed. This is a red flag.

Tool: Politwoops is a database of actual tweets that were posted, then deleted, by public officials.

Still, don’t be surprised if the “Dow Joans” tweet recirculates if the Dow Jones suffers another significant drop while Trump is in office.

A significant number of viral rumors begin as jokes — as pieces of satire created and shared by individuals who mistakenly believe that the humor is obvious enough to not need labeling. This highlights a few important points that explain why misinformation goes viral so quickly.

Key term: Confirmation bias is the innate tendency for our existing beliefs to interfere in our evaluation of information and evidence, causing us to seek justification for dismissing or accepting details in ways that validate our current viewpoint.

(To see this in action, take a look at the replies that were made to Shaun Usher’s original tweet along the lines of “I wish” or “This (sadly) is fake.”)

Second, confirmation bias can interfere with recognition of satirical posts, especially when those posts aren’t labeled as satire. It can also encourage people to like and share misinformation too quickly, without stopping to verify it — a perfect recipe for virality.

Finally, as Usher himself quickly realized, once a piece of misinformation is on the open web, it’s all but impossible to control. Even satire that is clearly labeled, or is published by a well-known source of satirical content, can be easily shared outside of that satirical context and mistaken for a genuine statement. For instance, someone could copy the misinformation — in this case Usher’s fake tweet image — and share it on Twitter, where it is likely to go viral again outside its original context: 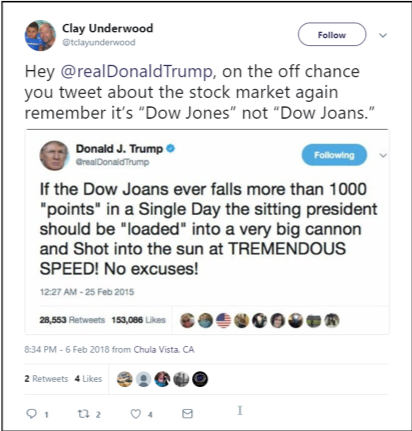 Insight: Viral misinformation usually quickly goes “cross-platform,” meaning that it’s shared on other social media platforms, on social sharing sites like Reddit, on partisan chat boards or in closed social media groups (where a lot of partisan misinformation is shared as ideological “ammunition”).

Once a piece of misinformation goes cross-platform, it becomes effectively impossible to track and correct. But flagging unlabeled satirical posts and other forms of misinformation as “fake” in replies and comments to those who (inadvertently or otherwise) share them can help reduce their spread and impact.

*An earlier version of this post said that Usher posted his tweet and the image of the fake Trump tweet “after the Dow Jones index dropped sharply in late March 2018.”  Since Usher’s tweet was dated Feb. 5 and time travel has not yet been invented, that would have been impossible. We regret the error. (July 6, 2018)