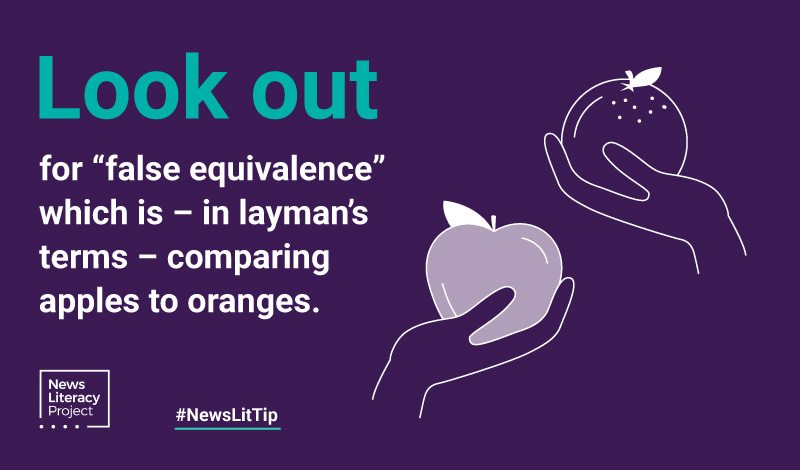 “This is not equal to that” is how one writer summarizes the logical fallacy known as false equivalence.

As the name suggests, false equivalence is a cognitive bias by which events, ideas or situations are compared as if they are the same when the differences are substantial. Those differences can be either in quantity or quality. This form of flawed reasoning can sneak into conversations, and it can show up in news coverage, too.

Here’s an example of false equivalence:

Yes, Mr. Smith is a serial embezzler, but Mr. Jones once littered in the park. Both are criminals!

This is a qualitative difference in which two acts are compared as if they’re equivalent. While each could be considered dishonorable, one clearly is worse than the other.

Here’s another example, this one from Checkology’s Arguments & Evidence lesson. This lesson offers a fictional situation in which a boy posts a photo of a test question on social media, and as a result, the testing company decides to invalidate all students’ tests. A student complains:

A teacher doesn’t punish a whole class when one student cheats! Why should this testing company punish every kid in America?!

While there is an apparent similarity between two things, important differences are ignored. That argument doesn’t compare apples to apples. A more reasonable comparison would be a teacher invalidating a class test because one student shared a test question with the entire class.

News reports can be guilty of false equivalence when two sides of an issue are cited as if they were equal. Consider climate change. Today, scientific consensus is that the planet is warming, and that human activities are the cause. Yet, as a 2014 column in Columbia Journalism Review points out, sometimes “false balance” has journalists “presenting the science as something still under debate.”